The perishable nature of concrete necessitates fast order taking and delivery and network outages were costly to the business. SD-WAN fixed that.

“With NSX SD-WAN by VeloCloud managed by Renodis, Cemstone is able to re-imagine the network, gain efficiencies it wasn’t able to achieve before, and deliver a better experience to our customers.”

Cemstone is part of a family of a family of companies that manufacture and sell concrete and related supplies, located throughout the midwest including Iowa, Minnesota, Missouri, Nebraska, North Dakota, South Dakota, and Wisconsin. With the perishable nature of concrete, it is critically important for all related business units to be able to take orders and fulfill them in a timely and non-disruptive matter as the inability to do so is costly in terms of revenues and long-term customer loyalty.

Supporting over 90+ locations and a long-term goal to expand to new sites quickly, Cemstone was limited in capabilities due to its dependence on an inflexible and expensive MPLS-based infrastructure. To access corporate applications and systems, all locations on the network were required to connect directly to headquarters, where all the information was centralized. However, this had become costly to maintain and was impacting productivity and efficiencies as connectivity outages were a common occurrence, especially in rural areas.

Corporate-wide initiatives included transitioning to cloud-based applications, reducing hardware dependency, migrating to a VoIP-based system to ensure that locations in rural areas were able to stay connected at all times regardless of transport used.

To achieve these goals, Cemstone knew it needed to adopt a new networking strategy that would provide scalability, dependability, flexibility, and security.

The Cemstone team turned to their longtime network partner, Renodis, for guidance and direction on setting a next-generation network strategy. Renodis is a valued implementation partner of NSX SD-WAN by VeloCloud, a leading SD-WAN technology provider, and has built a complete solution that not only provides the technical capabilities of the NSX SD-WAN ecosystem, but also wraps that solution into the Renodis Telecom Managed Services that Cemstone has depended on with Renodis for years.

Renodis and Cemstone launched into a partnership and program that included, and continues to include:

“With NSX SD-WAN by VeloCloud managed by Renodis, Cemstone is able to re-imagine the network, gain efficiencies it wasn’t able to achieve before, and deliver a better experience to our customers.”

MPLS was becoming increasingly expensive to maintain and manage but the move to lower cost transport options paired with an easy to manage console proved to have significant cost savings for Cemstone. With a deployment of a NSX SD-WAN Edge at every site on the network, Cemstone was able to use any connection available in its rural locations, including DSL, broadband, and 4G. Using commodity broadband links, even when deployed in multiple sets, was considerably less expensive than an MPLS or copper connected network.

Following the deployment of SD-WAN and as MPLS contracts began to expire, Cemstone was better able to assess its Total Cost of Ownership (TCO). Comparing to its cost of running MPLS and copper at select sites, Cemstone’s TCO was reduced by more than 50%.

Ease of Management and Deployment

Additionally, the Renodis and Cemstone teams, utilizing the NSX SD-WAN Orchestrator and the technology’s zero touch configuration management, could define a multi-site wave program execution that allowed for rapid deployment. Renodis provided the onsite technical staff to new sites, allowing a straightforward site visit. This consists of installing the V NSX SD-WAN Edge device, ensuring the device reaches out to the Orchestrator to download the config, and a few simple tests. There was no need for complex configuration work and comprehensive onsite testing.

At headquarters, where the ERP system and main hub of business applications were housed, the IT team installed three dedicated internet circuits, plugged into two NSX SD-WAN Edges in a high redundancy configuration. Using NSX SD-WAN Dynamic Multi-Path Optimization (DMPO) with this type of deployment, Cemstone could ensure that even if the primary connection failed and resorted to the secondary connection and, in the high likelihood that it failed, there would still be an available connection to allow business to run as usual.

Smaller and rural offices were able to connect on the network via cable modem, DSL, fiber, and best-option broadband with 4G used as backup. With SD-WAN, all offices regardless of size and technical staff at each, are able to ensure constant connectivity.

Cloud access was also simplified. NSX SD-WAN’s unique cloud-delivered architecture inherently makes it a perfect fit for cloud applications. As NSX SD-WAN Gateways are co-located with critical cloud applications, including Azure which is used by Cemstone, connection corporate-wide was seamless, fast, and less costly. With its previous network infrastructure, Cemstone would have had to use a dedicated VPN connection into Azure, which wasn’t efficient.

“Through growth opportunities, Cemstone will no longer be held back by legacy systems. Instead, Renodis managed NSX SD-WAN by VeloCloud allows us to get new sites up and running quickly and gain site visibility within hours.”

Cemstone decided to move away from its legacy, analog phone systems to a SIP-based system at its smaller sites to reduce costs and increase efficiencies. The legacy systems were Cisco router-based, but following the installation of NSX SD-WAN, all existing Cisco routers were removed and replaced with V NSX SD-WAN Edges, to which the voice system was connected. At larger sites, the phone system was plugged into PoE switches that then connected to NSX SD-WAN Edges.

With this migration, Cemstone was able to significantly increase quality of service (QoS) across the entire network and for each office to deliver a better quality of experience (QoE) for employees and customers alike. The shift to SD-WAN also reduced its dependence on expensively trained technicians and the need to deploy configuration changes router-by-router as any network change can be made centrally and automatically propagated to all connected NSX SD-WAN Edges. SD-WAN provided Cemstone confidence that it could run its highly important voice traffic over public broadband instead of dedicated lines. 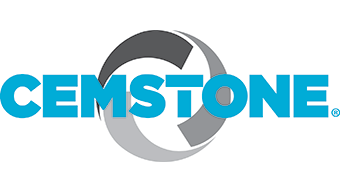 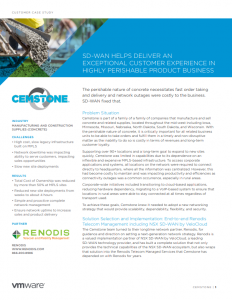